Last month, Nielsen published a piece of research on the use of voice recognition systems. Below an overview of most common use cases: 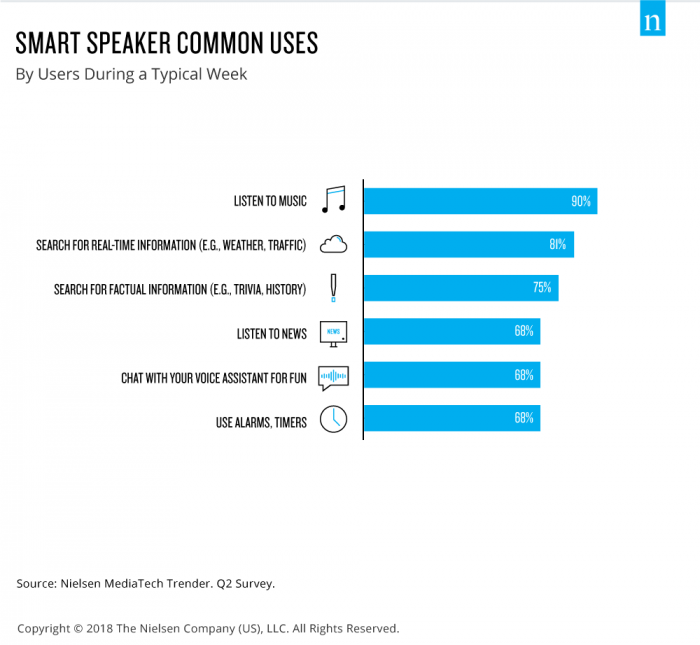 I use my three Alexa’s in a similar way except perhaps listening to music. Mostly because I prefer proper old-school stereo speakers. My main use case though is not on this list and that’s controlling other devices through Alexa. Most of my lights in my home can be controlled through Alexa. Before Alexa, I already invested in z-wave switches which I controlled with a remote. I like the idea of a programmable house. Some lights switch on automatically at sunset and switch off at around 10.30 pm to give the impression I’m home even when I’m not.
Same applies to my thermostat. It’s smart enough to keep the house at a comfortable temperature by itself and switch off when I’m not home, but sometimes the schedule doesn’t work out and I can ask Alexa to lower or increase the temperature.

Clearly, this is not the most common use case yet, but I suspect it will. The ecosystem is still immature. There are a few major smart home standards, but other vendors like Google and Philips implemented their own for a variety of reasons. Google is even worse because it uses different protocols in different products. There’s still work to do here.

What I do find fascinating is that none of this space is dominated or pushed forward by tech startups. Many VCs are even quite negative about the space. It’s almost if they feel caught off-guard and left out. At the same time, it’s still early. I’m 100% convinced that we will interact with devices using voice. I’m not 100% convinced that any of the solutions today on the market whether it’s Siri, Alexa or Hey Google is going to dominate this market. I’m a big believer of ambient computing and voice interaction is going to drive that.

If I had to nominate the best gadget I bought in 2018, it’s the Nintendo Switch. I love it because i…

One of the life hacks I enjoy every day, is my charging drawer. It may sound silly, but I really enj…

Four times a year, I treat myself with a “toy”. Usually, at this time of the year, it would’ve been …