Structural strength is one of the most important limitation to recognize when designing for 3D printing. It defines if a 3D printed part can survive the different steps involved in the manufacturing of the part — from printing to cleaning until shipping.

A feature is any part of the design where the cross-section of the feature is smaller than the required minimum wall thickness.

When I think of wall thickness, there are three distinct design requirements. I call them:

A bridge connects two distinct larger features of part. A great example is the neck of a figurine. The neck bridges the head and torso. 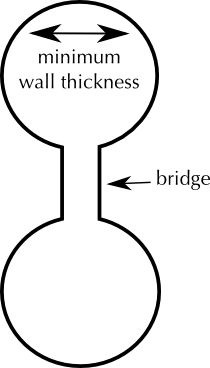 A wing is a surface area with variable thickness. Some parts of the wall are adhering to the minimum wall thickness; other parts are not. An example is a surface area, which is thick enough on one end and too thin at the other end. Like the wing of an airplane. 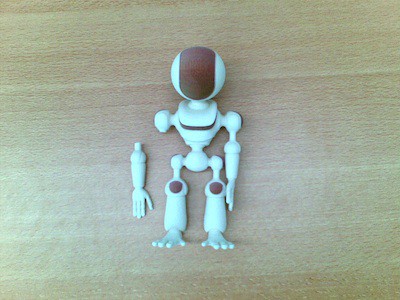 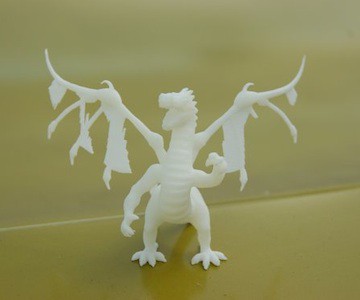 In the image on the top, you can see that the arm of the robot has broken off. This is a bridge problem. The critical part of the design is the connection of the arm to the shoulder. The connection is too thin to provide enough strength for connecting the heavy the lower part of the arm. In this case, the part was printed, cleaned and post-finished without problems. The part broke during shipment.

The image of the bottom shows a dragon with wings. The wings are actually solid planes in the 3D design, but they can out of the printer looking like this. The solid planes of the wings were too thin to be printed correctly. This is an example of the wing problem.

Another exception is a large, thin surface or plane. Even though, it adheres to the minimum wall thickness, and has the required structural strength, it can still pose a problem for the printing process. Most printing processes use heat during the production of the part. This heat is not perfectly distributed over the build-area. When a large, thin surface is unevenly heated, it will warp and bend. This is also a topic for another post.

Structural strength is an important consideration during the design of a part for 3D printing. When adhering to the minimum wall thickness requirement for a specific process or even over-engineering the critical areas, than any problems can be avoided. Since the minimum wall thickness requirement is only an approximation of the structural strength requirements, it is possible to defy the rules in certain cases. But requires export knowledge on the process and close cooperation with the operator to ensure the right location, orientation and handling of the part during the production process.

Three weeks ago, I wrote about how 3D printing as a manufacturing technology can impact supply chain…

The mono culture of 3D printing

Today I came across a couple of renderings on Behance called No Limit, which are an artist impressio…

Hyped expectations and what 3D printing really can do

3D printing used to be called exclusively rapid prototyping. This fitted with the primary use case o…